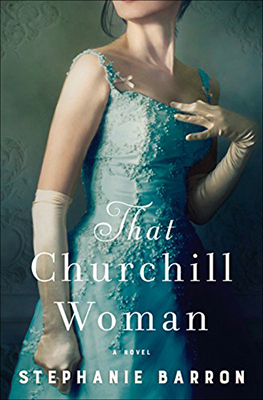 Wealthy, privileged, and fiercely independent New Yorker Jennie Jerome took Victorian England by storm when she landed on its shores. As Lady Randolph Churchill, she gave birth to a man who defined the twentieth century: her son Winston. But Jennie—reared in the luxury of Gilded Age Newport and the Paris of the Second Empire—lived an outrageously modern life all her own, filled with controversy, passion, tragedy, and triumph.

When the nineteen-year-old beauty agrees to marry the son of a duke she has known only three days, she’s instantly swept up in a whirlwind of British politics and the breathless social climbing of the Marlborough House Set, the reckless men who surround Bertie, Prince of Wales. Raised to think for herself and careless of English society rules, the new Lady Randolph Churchill quickly becomes a London sensation: adored by some, despised by others.

Artistically gifted and politically shrewd, she shapes her husband’s rise in Parliament and her young son’s difficult passage through boyhood. But as the family’s influence soars, scandals explode and tragedy befalls the Churchills. Jennie is inescapably drawn to the brilliant and seductive Count Charles Kinsky—diplomat, skilled horse-racer, deeply passionate lover. Their impossible affair only intensifies as Randolph Churchill’s sanity frays, and Jennie—a woman whose every move on the public stage is judged—must walk a tightrope between duty and desire. Forced to decide where her heart truly belongs, Jennie risks everything—even her son—and disrupts lives, including her own, on both sides of the Atlantic.

Breathing new life into Jennie’s legacy and the gilded world over which she reigned, That Churchill Woman paints a portrait of the difficult—and sometimes impossible—balance between love, freedom, and obligation, while capturing the spirit of an unforgettable woman, one who altered the course of history.

“[A] finely researched, sumptuous novel…Presenting a fiercely intelligent, independent version of Jennie, this satisfying book actively pushes back against her historical reputation as a scandalous woman to great, consuming effect.”
—Publishers Weekly

“For fans of ‘Downton Abbey’ and the Gilded Age, Stephanie Barron’s That Churchill Woman is the perfect confection of a novel…. A rollicking good read, highly recommended!”
—Melanie Benjamin, New York Times bestselling author of The Aviator’s Wife
“An immense accomplishment from a seasoned author.”
—Lauren Willig, New York Times bestselling author of The English Wife and The Glass Ocean
“What a read for anyone interested in the lives of women who have, until now, been largely unexplored…. Stephanie Barron’s immersive and richly detailed story gives a fascinating glimpse into the lives of society women, as well as the early life of Churchill himself.”
—Jane Thynne, author of The Scent of Secrets
“Barron vividly portrays Jennie again the backdrop of the Gilded Age… Sure to be a book club favorite.”
—Library Journal, STARRED REVIEW
“Barron paints a picture of a beautiful woman with enough determination and animal magnetism to get what she wants… the characters are captivating.”
—Kirkus Reviews

“Barron is an adept storyteller who brings to life one of the era’s most fascinating women.”
—Denver Post

“This is a wonderful vacation read, never too ponderous, and full of satisfying details about clothing, art, music, and social gamesmanship.”
—Historical Novels Society

In March of 1941, Virginia Woolf filled her pockets with stones and drowned herself in England’s River Ouse. Her body was found three weeks later. What seemed like a tragic ending at the time was, in fact, just the beginning of a mystery…

Six decades after Virginia Woolf’s death, landscape designer Jo Bellamy has come to Sissinghurst Castle for two reasons: to study the celebrated White Garden created by Woolf’s lover, Vita Sackville-West, and to recover from the devastating wound of her grandfather’s unexplained suicide. In the shadow of one of England’s most famous castles, Jo makes a shocking find: Woolf’s last diary, its first entry dated the day after she allegedly killed herself.

If authenticated, Jo’s discovery could shatter everything historians believe about Woolf’s final hours. But when the Woolf diary is suddenly stolen, Jo’s quest to uncover the truth will lead her on a perilous journey into the tumultuous inner life of a literary icon—whose connection to the White Garden ultimately proved devastating.

Rich with historical detail, The White Garden is an enthralling novel of literary suspense that explores the many ways the past haunts the present—and the dark secrets that lurk beneath the surface of the most carefully tended garden.

“Barron puts her talents for suspense to good use examining the death of Virginia Woolf from the vantage point of present-day England. Barron invests the text with a quick pace and an absorbing plot, making this a dynamic thriller with a well-tempered literary fixation.”
—Publishers Weekly
“Barron is a master at crafting English period pieces.”
—Denver Post

“…intriguing and highlights not only Barron’s ability to alchemize historical fact into fiction but also her ability to present absorbing details of Sissinghurst’s gardens, history and the surrounding Kentish countryside.”
—The Los Angeles Times

“…an onion of a novel, with successive peelings revealing much to Jo Bellamy…a remarkable literary achievement.”
—HuntingtonNews.net
“…an intriguing tale, weaving together the tendrils of past and present, growth and corruption, love and despair into a landscape of hope.”
—Laurie R. King
“Part mystery, part a search for redemption, readers will be entranced from the moment they open The White Garden.”
—Tasha Alexander 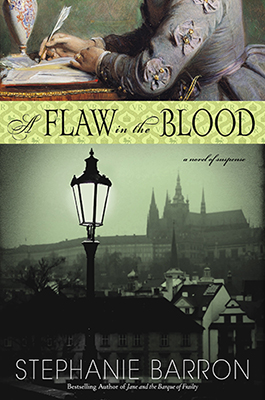 A Flaw in the Blood

The acclaimed author of the bestselling Jane Austen mysteries brings rich historical immediacy to an enthralling new suspense novel centered around Queen Victoria’s troubled court… and a secret so dangerous, it could topple thrones.

Windsor Castle, 1861. Prince Albert, the Queen’s Consort, lies dying, and Victoria summons Patrick Fitzgerald, the clever, embittered Irish barrister who helped defend Her Majesty from a would-be assassin twenty years earlier. Within hours, Fitzgerald’s beautiful ward is nearly murdered, his chambers are ransacked, and another girl lies dead. Could an unknown force at Windsor want Fitzgerald silenced? And why? The answers are entangled in an electrifying tale of intrigue, seduction, and betrayal, partially narrated by Europe’s most powerful monarch.

As fascinating as the Queen herself, seamlessly blending history and suspense, A Flaw in the Blood is an elegant thriller that is utterly convincing—and utterly surprising—to its very end.

“Engaging… The history of the royal line is diverting, and the royal gossip is even more so.”
—Publishers Weekly
“[A] beautifully written novel, filled with twists and turns…. And you will be so caught up in the characters that you’ll wish Barron would turn Georgie and Patrick into a series, just as she did with Jane Austen.”
—Denver Post
“A suspenseful tale that fits with several little known facts about the Victorian monarchy…. Barron skillfully paces the book to keep the reader’s interest heightened.”
—Boulder Daily Camera