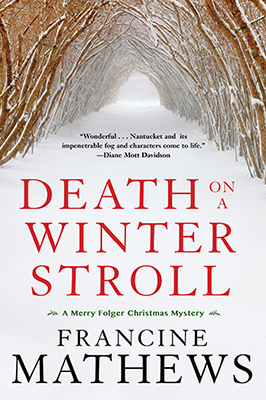 Death on a Winter Stroll

No-nonsense Nantucket detective Merry Folger grapples with the aftermath of the COVID-19 pandemic and two murders as the island is overtaken by Hollywood stars and DC suits.

Nantucket Police Chief Meredith Folger is acutely conscious of the stress COVID-19 has placed on the community she loves. Although the island has proved a refuge for many during the pandemic, the cost to Nantucket has been high. Merry hopes that the Christmas Stroll, one of Nantucket’s favorite traditions, in which Main Street is transformed into a winter wonderland, will lift the island’s spirits. But the arrival of a large-scale TV production, and the Secretary of State and her family, complicates matters significantly.

The TV shoot is plagued with problems from within, as a shady, power-hungry producer clashes with strong-willed actors. Across Nantucket, the Secretary’s troubled stepson keeps shaking off his security detail to visit a dilapidated house near conservation land, where an intriguing recluse guards secrets of her own. With all parties overly conscious of spending too much time in the public eye and secrets swirling around both camps, it is difficult to parse what behavior is suspicious or not—until the bodies turn up.

Now, it’s up to Merry and Detective Howie Seitz to find a connection between two seemingly unconnected murders and catch the killer. But when everyone has a motive, and half of the suspects are politicians and actors, how can Merry and Howie tell fact from fiction?

This latest installment in critically acclaimed author Francine Mathews’s Merry Folger series is an immersive escape to festive Nantucket, a poignant exploration of grief as a result of parental absence, and a delicious new mystery to keep you guessing. 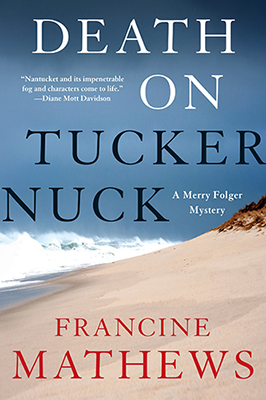 In the Category 3 winds of a late-season hurricane, Nantucket police detective Merry Folger and her team attempt a rescue off the secluded island of Tuckernuck—only to discover a deadly secret.

As a hurricane bears down on Nantucket, Dionis Mather and her father have their work cut out for them. Their family business is to ferry goods and people back and forth from Tuckernuck, the private island off Nantucket’s western tip, a place so remote and exclusive that it is off the electric grid. As caretakers of the small plot of sand in the middle of the Atlantic, the Mathers are responsible for evacuating Tuckernuck’s residents, who range from a stubborn elderly native who refuses to leave her family home to the abandoned summer house pets of an absentee NFL quarterback. But as the storm surge rises and the surf warnings mount, Dionis has to make a choice: abandon whatever—or whoever—was left behind, or risk her own life by plunging back into the maelstrom. Even she has no idea what evil the hurricane is sheltering.

When the coast guard notifies the Nantucket police of a luxury yacht grounded in the shoals off Tuckernuck’s northern edge—with two shooting victims lying in the main cabin—detective Meredith Folger throws herself into an investigation before the hurricane sweeps all crime-scene evidence out to sea. Merry is supposed to be on leave this weekend, dancing at her own wedding, but the Cat 3 has thrown her blissful plans into chaos. As her battered house fills with stranded wedding guests and flood waters rise all over Nantucket Island, Merry has her own choice to make: How much should she risk in order to bring a criminal to justice?

“Readers will keep turning the pages to see what happens next. Mathews once again displays her storytelling powers.”
—Publishers Weekly
“An exhilarating, page-turning blend of mystery, detection, romance, and people-versus-the-elements.”
—Kirkus
“Nature’s fury and the frantic, batten-down-the-hatches scramble to protect man and beast make for gloriously tense reading…the race against the clock is thrilling.”
—Booklist 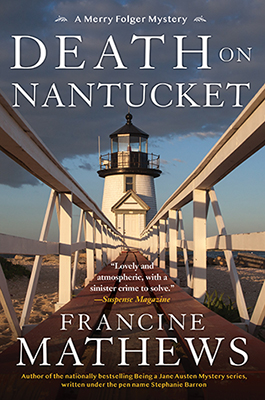 Spencer Murphy is a national treasure. A famous correspondent during the Vietnam War who escaped captivity in Southeast Asia, he made a fortune off of his books and television appearances. But Spence is growing forgetful with age; he’s started to wander and even fails to come home one night. When a body is discovered at Step Above, the sprawling Murphy house near Steps Beach, Nantucket police detective Meredith Folger is called in to investigate.

The timing couldn’t be worse: It’s the Fourth of July, Merry’s planning her wedding to cranberry farmer Peter Mason, and her new police chief is gunning for her job. Merry is inclined to call the death at Step Above a tragic accident . . . until another member of the Murphy clan comes to a brutal end. As Merry grapples with a family of unreliable storytellers—some incapable of recalling the past, and others determined that it never be known—she suspects that the truth may be forever out of reach, trapped in the failing brain of a man whose whole life may be a lie.

“Mathews takes readers on a holiday tour with an ocean view, complete with a murder mystery as twisted as the emotions that family can evoke.”
—Publishers Weekly

“The story is lovely and atmospheric, with a sinister crime to solve.​”
—Suspense Magazine

“It’s nice to see Folger back in action after a too-long hiatus.”
—Booklist 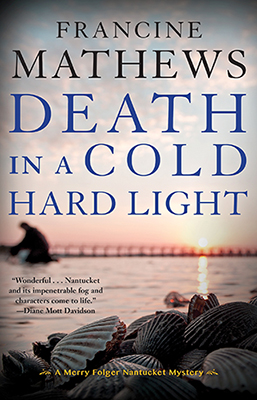 Death in a Cold Hard Light

In Francine Mathews’s Death in a Mood Indigo, Detective Meredith Folger’s career hit new heights of terror and self-doubt. Now Merry is more than ready for a peaceful vacation, or maybe even wedding plans. So she is not pleased when her police chief father calls her home from Greenwich to investigate what looks like an accidental drowning…

To learn what really happened in the midnight waters off Old North Wharf, Merry must confront the truth of her own past. It’s a case that will test her loyalties and strain her ties to the people she loves most. What finally is more important—her need for justice, or for Peter Mason? Should she shield her father, or force him to shoulder his share of the blame? When a second body is found, her choice becomes agonizingly clear. Merry cannot allow a dangerous killer to strike again…

“Atmospheric . . . Action-filled.”
—Publishers Weekly
“An admirable, well-written series, with Folger evolving into an ever more complex character as love and loyalty collide with her professional pride and ethics.”
—The Orlando Sentinel
“Dark, taut, and unsettling . . . A nail-biting pace.”
—Booklist 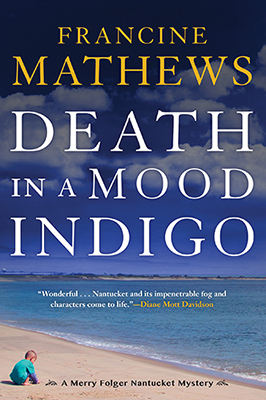 Death in a Mood Indigo

In Francine Mathew’s first two mysteries, Death in the Off-Season and Death in Rough Water, rookie detective Merry Folger proved to herself and to her father, Nantucket police chief John Folger, that she had what it takes to solve a murder. Now her savvy is being put to the test again. Only this time she may be in over her head.

For two small children playing on Sunset beach, it was the stuff of nightmares…digging in the damp sand, hoping to unearth buried treasure, only to uncover a human skeleton But for Detective Merry Folger, who’s investigating the case, the real horror isn’t revealed until she learns that the bones belonged to a woman who was apparently murdered anywhere between two and ten years ago. 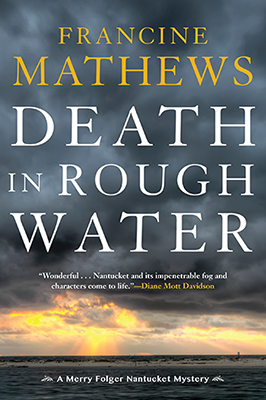 Detective Merry Folger won the hearts of readers in Francine Mathews’s first mystery, Death in the Off-Season. Now, fresh from her first murder case in that book, Merry Folger is unwillingly sucked into her second. The daughter of the Nantucket police chief, Merry spent her first case proving to her father and herself that she had what it takes to solve a murder. Now she’s more savvy and experienced, but this time one of her friends is involved.

Del Duarte has returned to Nantucket with a baby, but she’s keeping quiet about her daughter’s parentage. When her own father, Joe, an experienced fisherman, is swept overboard in a spring storm the death is pronounced accidental. Del thinks it’s murder and when she and her baby receive threatening letters, Merry defies her own father to investigate.

“Merry Folger sails surely through choppy seas of murder, insurance fraud and infidelity in her second outing . . . Mathews skillfully incorporates close-knit relationships, small-town gossip and a salty Nantucket flavor.”
—Publishers Weekly
“Mathews brings the landscape of Nantucket to life in all its sights, sounds, and smells. She also brings in many fascinating facts about the island​. Merry Folger is a strong, intelligent main ​character.”
—Kittling Books 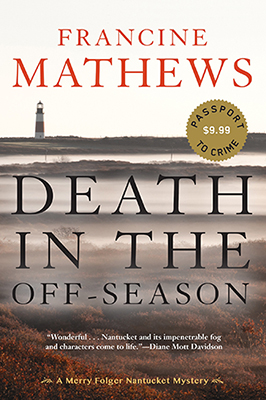 Death in the Off-Season

When Rusty Mason, scion of one of Nantucket’s oldest and wealthiest families, is found dead in a flooded cranberry bog one foggy fall night, thirty-two year old detective Meredith Folger is faced with her first murder case. Rusty, it seems, had been absent from the country for over a decade—ever since he was indicted for securities fraud. No one expected him to show up that night. No one, that is, except his killer.

Peter Mason, the bog’s owner, seems less than moved by his brother’s brutal death. The two men, it turns out, had been nursing a decade-old grudge over a woman. Could Peter have killed Rusty, or was Rusty attacked by mistake in the fog—when the killer thought he was Peter?

“A wonderful find . . . Detective Merry Folger comes across as a real person, albeit a smart one, with doubts and concerns.”
—The Denver Post
“Mathews uses her setting and its unique population skillfully.”
—The San Diego Union-Tribune
“Spunky but inexperienced, third-generation Nantucket cop Meredith Folger investigates murder in this spare, atmospheric debut.”
—Publishers Weekly
“Wonderful . . . Nantucket and its impenetrable fog and characters come to life.”
—Diane Mott Davidson
We use cookies to ensure that we give you the best experience on our website. If you continue to use this site we will assume that you are happy with it.OK