I have always been someone who wrote for a living. When I was young, I put words on paper because I was a solitary child, because my father died when I was a teenager, and the world I could make in the pages of lined notebooks helped keep my loneliness at bay. I wrote to escape, to conceive a more exotic life. I wrote myself out of despair and into adulthood, and words, for me, will always possess a transformative power.

But ultimately I wrote because I had no choice. Words are the way I understand existence. Maybe this comes from voracious reading, or maybe from the particles of DNA in my body. I know that I am incapable of drawing more than a stick-figure, incapable of singing an unwavering note; but words are the gift of my particular brain. When I write, I live out my destiny as much as an elk does, bugling in the autumn, or a salmon swimming upstream.

Russell Baker, in his book Growing Up, declared that he decided early in life that: The only thing I was fit for was to be a writer, and this notion rested solely on my suspicion that I would never be fit for real work, and that writing didn’t require any (Russell Baker, Growing Up, Ch. 9).

He was obviously going for a laugh when he put that sentiment down on paper. It’s common for laymen to regard writers as self-indulgent, rather indolent people who like to sleep late, work in their pajamas, and earn their living in fits and starts. Writers don’t have their taxes withheld, which makes them almost un-American. But Russell Baker was also confessing his writer’s self-doubt: If it comes as naturally as breathing, it must be illegitimate.

Those of us who write—who have scribbled words on paper since we could hold a pencil—live deep down with the paradox of the gift. We know that words are the only way we understand experience—we live our great moments of joy and sorrow most fully once we’ve managed to write a scene about them—but we’re almost ashamed of how easily that happens. Everything is material, including the people we live with, the terrible or lovely things they do to us, the lies and the sadness and the joy we ourselves cause. It all ends up on paper. In every writer, there is something of the exploitative and the ruthless; and perhaps this is what it means to attempt art.

We writers may avoid fiction for years together, putting the words into newspapers, or book reviews, or academic journals or how-to guides. We may write letters that no one reads, or volume after volume of meticulous journals.

But whatever we do with the words that come, we cannot stop them coming. And because it is somehow as automatic as breathing, we take it, on some level, for granted.

Writing isn’t work. Writing is how we live. We take that material and fashion something spiritual from it, a guide for traveling from one day to the next.

Her prose sings because she was writing most deeply about what sustained her, about the force that kept her going year after year, from one continent to another, despite war and heartache and age and illness.

A love of words can sustain us when nothing else will. We find it in the solace of books beloved from childhood, from that flash of genius when we craft a truly great sentence, from a smattering of print on the page of a letter.

We horde words like precious objects, turning them over in our minds. We become thieves in the conversational night, beggars at the feet of the eloquent, covetous of all we cannot say.

My dear friend Barbara wrote from Taipei, “The rain comes as suddenly as a knock at the door and pours straight down like it’s looking for Noah.” I’ve emailed that sentence to everyone I can think of, because it’s perfect, and I wish I had written it; I wish I could steal it, and put it again in the mouth of some character.

Barbara does not write for a living. But Barbara could.

When I say, as cavalierly as Russell Baker, that writing isn’t work, it’s how we live, I’m not talking about editing, here, or the agony of revision or the pain in the ass that is outlining a novel. I’m not talking about research or character development or what it takes to hold suspense.

I’m talking about the impulse that gets me up at night, some nights, when my children have long since gone to sleep, and the words of dialogue that have kept sleep at bay, force me downstairs in the heatless chill of my empty house. I’m groggy and humming with words; I’ve got to get them down on paper, thrown onto a screen, or I’ll be editing and re-editing them in my brain until dawn.

I’m talking about the moment that comes, in every novel I’ve ever written, when the outlines and the research and the plotting are forgotten, and my characters grow wings. They pick up the book and fly away with it, and I run after them, typing furiously, taking dictation as they tell me how things must be. Ernest Hemingway said, in Old Newsman Writes, that all good books are alike in that they are truer than if they had really happened and after you are finished reading one you will feel that all that happened to you and afterwards it all belongs to you: the good and the bad, the ecstasy, the remorse and sorrow, the people and the places and how the weather was. If you can get so that you can give that to people, then you are a writer.

When the words come like that, in a rush, I feel like a medium. Not a dress size, but an old-fashioned channel for the spirits. The words come from beyond me, somehow, or perhaps from deep within me, and they are forced to the surface by emotion and thought. I can find no other way to describe the creative process. I could no more shut out those words than I could cease to love or feel.

Sometimes words come to me in the shower. Or while I’m stopped at a red light. I once wrote the final scene to a book I hadn’t started while waiting for an airport shuttle. But they also come to me with surprising readiness most days that I sit down before my computer.

I have the luxury of writing for a living. I recognize that it is a luxury—to have escaped the day job, the “real work” that Russell Baker is afraid of—the legitimacy of a formal office, and like him, I feel vaguely guilty about it. I have the luxury of ordering my days. But that also requires a measure of discipline. With the privilege comes the responsibility not to misuse it.

I could plant bulbs all day. I could read cookbooks. I could needlepoint while my children build with Lincoln Logs. But instead I sit down at the computer every morning of my life and wait for the words to come. They have never failed me yet. It’s my bargain with the medium, with the rush from outside or within, that if I sit there, the words will grant me their blessing.

Years ago when my elder son, Sam, was five, he asked me why I write books. I tried to make him understand. I said that I got to tell stories that people liked to read. That my books were in libraries. That it was my job to stay home and make things up. He looked at me incredulously and said, “Gosh, Mom, I wish I were you!”

I laughed. I told him that he could be. He has a gift for telling stories; he tells them to himself all day long. He thought about it and said, “Well, Mom, when you’re done being a famous girl writer, you could always drive a race car.”

I like to think about that. Me, in the car, something fast and red without a top, probably, one finger on the wheel. But the words would still be there, humming in my brain while the tires spin and the lights flash and the checkered flag sweeps down in a blur. The words are never done. They’re the essence of how we live; they’re the signposts that mark the journey; they’re the only certainty we possess of having experienced at all. We don’ t write because it pays or because it’s cool to bring up at your average cocktail party. We write, as Carlos Fuentes says, so as not to die. 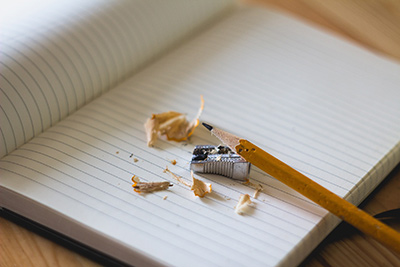 “I always heard, ‘Write about what you know.’ I disagree. I say, write about what you love. You can always research the rest. If you’re going to live with a character and a place for months on end, you’d better love them. And the passion comes through. Editors are looking for passion.”

“Don’t write to fill a gap in the market. It’ll be gone by the time you get there.”

“Get into a book critique group. There’s great emotional support and objective criticism.”

Outline your work. “You need to know how to get from here to there, from beginning to end. Without an outline… It’s like trying to get into a car and drive to New York without a map. You know where you want to go, but not necessarily how to get there.”

(excerpted from the Colorado Springs Gazette-Telegraph)

We use cookies to ensure that we give you the best experience on our website. If you continue to use this site we will assume that you are happy with it.OK